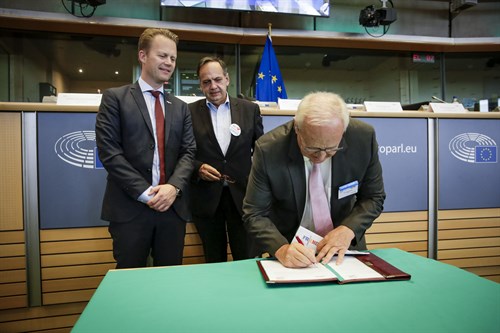 Danish, Swedish and German politicians signed a joint declaration on the importance of the Fehmarn Connection in Brussels. As an added bonus, there was news of financial support from the European Coordinator.

Danish, Swedish and German politicians signed a joint declaration on the importance of the Fehmarn Connection in Brussels. Added bonus was positive news of financial support from the European Coordinator.

Coordinator of the Scandinavian-Mediterranean Transport Corridor, Pat Cox, was repeatedly applauded by the audience at the European Parliament while participating in the panel discussion on September 26 during the European launch of the Friend of Fehmarnbelt initiative in Brussels.

He had a number of clear messages with him from his homeland, Ireland:

– Let there be no doubt: The Fehmarn Connection is, and will continue to be, a European top priority, he said.

Pat Cox had forgotten his glasses and had to make do with sunglasses in the not overly bright committee room in the European Parliament.

To local radio station, P4 Zealand, who had found their way to Brussels, Pat Cox added that the EU support, just over 4.4 billion Danish Crownes (money, the Fehmarn Construction has already been allocated) are not necessarily lost because they are not used in the current budget period due to delays.

– We will try to negotiate to keep the money in the purse and thus be able to use them when the time comes, he explained to P4 Zealand.

The normal practice for funding allocated by the European Commission for such projects is for them to be used for the duration of the budget until 2020. In 2015, 4.4 billion Danish Crowns were allocated for the construction of the tunnel between 2016 and 2019. Today, Fehmarn A / S does not expect construction to start before 2020.

It was thus a happy and content Schleswig-Holstein Transport Minister, Bernd Buchholz, who listened to Pat Cox. He has to deal with the concerns of the population and environmental organizations as revealed by public consultations on the project.

– This is an enormously important statement for both the German and Danish sides, was his response.

A focus on the positive

The resigning chairman of STRING cooperation, Steen Bach Nielsen, is of the same opinion.

– As I heard Pat Cox today, he gave the impression that we could most likely hold on to what we have already been promised, Bach Nielsen stated to radio P4 Zealand.

The initiative Friends of Fehmarnbelt, which was the starting point of the event in Brussels, has just been initiated by Steen Bach Nielsen who wants to shift focus from the negative stories of delays to the positive stories of growth, jobs, shorter travel times and less CO2- emissions.

– We have sent a strong signal to the European Parliament, the European Commission and the member states today emphasizing the importance of the Fehmarnbelt Fixed Link. This historically large infrastructure project will increase growth, create jobs, reduce CO2-emissions and remove a priority bottleneck in the TEN-T corridor. Together we will do everything we can to help the process forward as smoothly and quickly as possible, Steen Bach Nielsen explained.

The hosts of the event were four members of the European Parliament from Sweden, Denmark and Germany. From the Danish side, Jeppe Kofod was pleased that Brussels was once again reminded of what

– enormous benefits this infrastructure project has for the citizens, for business, jobseekers, the environment and for growth in general on both sides of the tunnel.

– In Brussels, we are starting work on the next multiannual framework budget. I will on my part fight to make the European Commission and the member states aware that grants for cross-border infrastructure projects should continue to be a priority part of the upcoming EU budget, he said.

– There is no doubt that the forthcoming budget negotiations will be tough. It is therefore extremely important that we tell our national governments and the European Commission – and remind even ourselves – that EU funding should be retained for projects such as the Fehmarnbelt tunnel,

Fleckenstein said, and added during the debate that the Transport Committee in the European Parliament, that he himself is more than convinced and that the task now is to convince the budget committee.

During the event, Steen Bach Nielsen and the host MEPs signed a joint declaration that the Fehmarnbelt link is an important part of the Scandinavian-Mediterranean Corridor, and thus is crucial for achieving the EU’s goals of growth and sustainable transport. The declaration is to be sent to a number of senior European politicians.

About the European launch of Friends of Fehmarnbelt:

The event was arranged by: