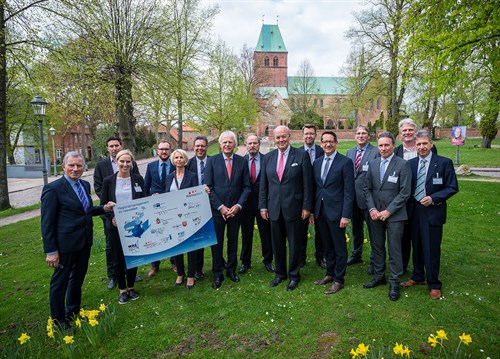 Community makes us strong: Twelve actors have teamed up for a new ’Regional Management HanseBelt’. The new initiative is financially supported by the Land of Schleswig-Holstein and is now under the management of the Chamber of Commerce of Lübeck.

On 24 April, 80 representatives from business and politics gathered at the Circus Museum in Ratzeburg. The meeting was organized by HanseBelt, representing the counties of Herzogtum Lauenburg, Stormarn, Segeberg, Ostholstein and the Hanseatic City of Lübeck, together with their respective business promotion companies. At the meeting, Schleswig-Holstein’s Interior Minister, Hans-Joachim Grote (CDU / Christian Democratic Party), handed over a grant of 644,850 Euros to HanseBelt.

The grant was given to promote ‘Regional Management HanseBelt’s future work in strengthening the cooperation of the counties and cities, as well as their political efforts, for a regional utilization of the existing potential that will arise with the Fehmarnbelt Tunnel.

In the future, a team of three employees will work to strengthen the attractiveness and economy of the region between the Metropole Region Hamburg in the south and the Danish-Swedish Øresund Region in the north. Efforts will focus on development of new business areas, mobility, marketing and tourism.

” ‘Regional Management’ will contribute to the improvement of framework conditions for growth and prosperity in HanseBelt. The industry sees itself as a motor for further development of cooperation”, the President of the Chamber of Commerce Friederike C. Kühn stated.

Minister: Cooperation in the region has a special value

“Competition is not the engine of a future-proof development for regional development. Co-operation is the way to success”, Schleswig-Holstein’s Interior Minister Hans-Joachim Grote emphasized.

“Therefore, I am pleased to hand over ‘Regional Management HanseBelt’ a grant of 645,000 €. Cooperation in the region has a special value for the state. The HanseBelt region it is not only part of the Metropol Region of Hamburg, but also part of a larger German-Danish region, which will gain increased importance through the establishment of the Fehmarnbelt Fixed Link. Regional management is important in facilitating the region’s particularly good location”, the minister stated.

Regional management HanseBelt will strengthen the economic factors that are crucial for both existing and new businesses.

“Our focus is on issues that are crucial to our economic development, but that cannot be resolved by counties or cities alone,” project manager Hendrik Juhnke said.

Eight years ago, in connection with the plans for the Fehmarnbelt Fixed Link, a regional development concept for southern Schleswig-Holstein was developed. With the new state grant, the initiative, which has now been put in the hands of the Chamber of Commerce in Lübeck (IHK zu Lübeck), has officially received a push forward.