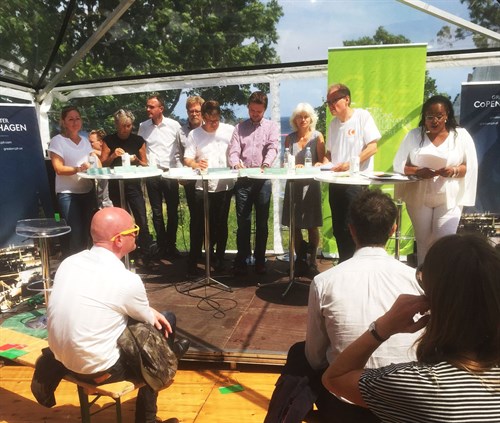 Greener transport: We could save DKK 1 billion every day in the EU – provided that we don’t import oil

In the debate on how to persuade more people to switch from petrol or diesel to alternatively powered vehicles, views are poles apart even in the STRING corridor. This was clear after a debate at Folkemødet 2016, organised by STRING and the GREAT project.

Huge amounts would be saved if the EU stopped importing oil and the funds could be better spent on investment in green transport. This was one of many statements from the “Full speed ahead – but on what?” event – a debate on green transport that STRING and the GREAT project organised at this year’s Folkemødet (People’s meeting) on Bornholm.

Opening the debate, E.ON’s Head of Communications, Susanne [KS1]  Tolstrup, set out the fundamental dilemma that the producers of both alternatively powered vehicles and suppliers of non-fossil fuels have already invested heavily in the development of vehicles as well as refuelling and recharging stations. But the transformation is coming to a standstill, the industry makes no money, she said. So why should they continue to invest in sustainable transport?

Member of the Swedish parliament, Karin Svensson Smith (Green Party) responded with a demand for a common policy for the area, one that the public sector, the general public and industry could support.

The Federation of Danish Motorists (FDM) representative, Torben Lund Kudsk, thought it was vital to abolish behaviour regulating taxes. There should a new system. In addition, the FDM’s position is that there should be optional access to both fossil and non-fossil fuels.

Steen Christiansen, Mayor of Albertslund and Chairman of Greater Copenhagen, stated that the government should be at the forefront when it comes to the transition to green transport.

Jens Mandrup, Chairman of the Environment and Transport Committee in the Capital Region, pointed out that it is not necessary to wait for national or European measures, since it is already possible to promote green transport at local and regional levels.

And what about heavy transport?

Anne Grete Holmsgaard, Director of BioRefining Alliance, outlined dilemma number two: what about heavy transport? Lorries across Europe, aircraft, ships and traditional vehicles – these will still be in the ascendant for years to come. Biomass from waste, manure, wood chips, etc. will play a role here. But the question is, will Denmark be just a customer buying other countries’ products? Or will politicians ensure that it is possible to set up facilities in Denmark?

And she replied herself to her last question: if the government fails to help, it will not happen. All new technologies are expensive, she said.

Thomas Hansson, STRING Chairman from Region Skåne, emphasised that biogas – which is used on a large scale in Sweden – could be big, provided that efforts are targeted in favour of it. In Region Skåne, biogas is already a part of the circular economy, he said.

Biogas has to be the future for heavy traffic, agreed Jeppe Juul from the Ecological Council. But there should not be a gas facility at every street corner. In cities and as far as private transport is concerned, focus should be on electricity.

And what about motorists?

Torben Lund Kudsk from FDM posed another dilemma: his premise was that without the car Denmark would grind to a halt. But how to keep motoring during the transition to a low carbon society? Cars with alternative fuels are still expensive for the private car owner. And the tax revenue of DKK 47 billion is important for the Treasury, apparently. What can we do while we wait for cheaper, more useful technologies and the political courage to reform? Does it simply continue to be a public task to forge ahead?

We have different support schemes in northern Europe, providing a range of benefits for fossil-free transport, said Karin Svensson Smith. For her, it is essential that northern Europe learns from each other and works to create a common market. Jens Mandrup added that it was important to strive for a common standard rather than a joint policy. This is more realistic and contains opportunities for joint actions and common requirements.

Steen Christiansen pointed out that joint efforts to create a greener transport sector had to take into account the fact that the energy sectors in Denmark and Sweden were quite different. Thomas Hansson noted that it was important to look at the transport sector as a whole, when embarking on the green transition.

The conclusion was that although it was clear that the participants were united in being positive about greener transport, the priorities and road to greater sustainability were quite different.

Jeppe Juul from the Ecological Council pointed out that the EU could save DKK 1 billion every day if the import of oil ceased – the money could be better spent on promoting fossil-free transport. FDM’s Torben Lund Kudsk demanded a new tax system. Thomas Hansson from Region Skåne and STRING stated that Skåne stood ready to pay what the green transition will cost. Jens Mandrup maintained that one should push hard on the transition at the local level. Karin Svensson Smith would put an end to fossil fuels – and demanded cities for people instead of cars. Steen Christiansen agreed: better cities for the public was his response.