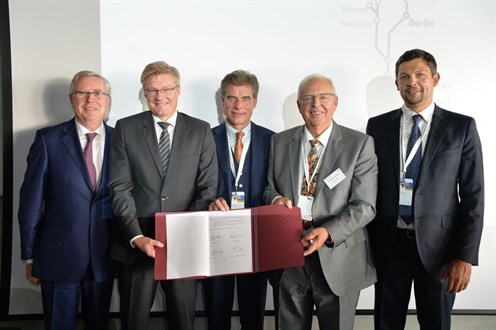 North meets South at the Brenner Base Tunnel

On 6 February, STRING’s Political Forum – under the leadership of Chairman Steen Bach Nielsen – will meet their political colleagues from The Province of the Tyrol, Austria and Südtirol, Italy to learn from each other.

The politicians behind the two largest European infrastructure projects, the Brenner Base Tunnel between Austria and Italy, and the Fehmarn Fixed Link between Denmark and Germany will meet on February 6 in Innsbruck to learn from each other’s experiences from the processes of the large-scale projects.

The idea is to focus on citizen involvement, environment, planning and challenges for extensive cross-border infrastructure projects, as the Brenner Base Tunnel and the Fixed Fehmarn Link are the most prominent examples of state-of-the-art large-scale infrastructure constructions.

In addition, the politicians will discuss topics regarding regional development and EU infrastructure programs.

The politicians will also visit one of the Brenner Base Tunnels Information Centre, “Tunnelwelten” in Steinach, and the tunnel construction site in Ahrental.

The meeting will take place as part of the cooperation agreement between the Brenner Base Tunnel and the Fehmarn project, which was established during the Fehmarnbelt Days in Hamburg last September.

Both projects are part of the EU TEN-T Scan-Med Corridor that stretches from Finland in the north to Malta in the south, crucial north-south axis for the European economy.  The Scan-Med is one of nine so-called “Core Network Corridors” which the EU has identified as particularly important for integration and trade in Europe.

When both projects have come into operation, remove the two biggest infrastructural bottlenecks in Europe. Expected opening of the two projects is for Brennertunnelens part 2026, while Fehmarn tunnel is expected to be opened between 2028 and 2030.

“Core network corridors” were introduced to facilitate the coordinated implementation of the core network. They bring together public and private resources and concentrate EU support from the CEF, particularly to:

Read more on the Brenner Base Tunnel here