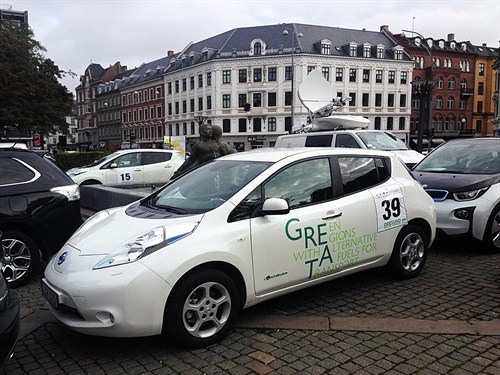 Oresund Rally for the win!

The Oresund Electric Car Rally was held for the fifth year in a row on the 19th-20th of September 2015 and the interest for the rally was bigger than ever.

Almost 60 vehicles started the race at Frederiksberg in Copenhagen and drove to Elsinore in the most climate friendly manner possible. After a ferry trip across the Oresund to Helsingborg in Sweden it was time for precision testing and ending up for the “Electric Car Day” at Sundstorget.

Sunday’s competition was a regularity rally – or time speed distance – from Helsingborg to Malmo with a well-deserved break in Borstahusen in Landskrona. The goal in Malmo was Stortorget in the middle of the city; and again there was a “Electric Car Day” to create awareness and share information to the general public about the possibilities of electric cars.

E-vehicles are GREAT
Britt Carlsson- Green, Strategist in Sustainable Transports from Region Skåne explains why it is important for Region Skåne to take part in the Oresund Electric Car Rally:

– For Region Skåne it was important to participate in the Electric Car Rally for several reasons. In general, the rally gives Region Skåne a possibility to learn more about electric cars’ advantages and disadvantages. However, specifically this year, it was a chance to promote the coming project, GREAT – Green Region with Alternative fuels for Transport – which Region Skåne is Lead Partner of.  Britt Carlsson- Green will be the future Project Manager of the GREAT Project.

The EU Commission’s fund for connecting Europe, CEF – Connecting Europe Facility – has decided to support one of the most ambitious projects for alternative fuels ever in Europe. A lighthouse project, it has been called. The goal of the project is to build a reliable infrastructure for alternative fuels in the corridor from Hamburg all the way to Oslo in Norway and to Stockholm.  In a cooperation between private and public partners, GREAT will build the infrastructure for electric chargers and tanks for liquid gas for heavy vehicles.