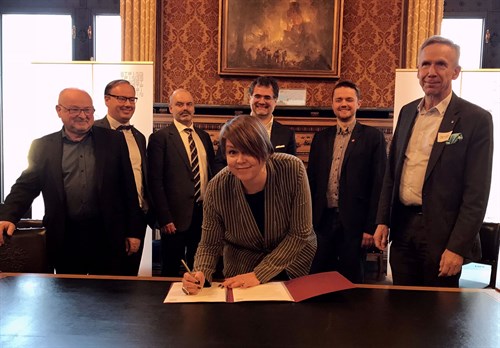 By welcoming Akershus County and Østfold County from Norway and Region Västra Götaland, Region Halland and the City of Malmö from Sweden, STRING now encompasses a total of 11 regions and cities dedicated to developing sustainable growth and connectivity across four nations.

As of a political decision today, the STRING political partnership covers four countries, 9 regions, 3 cities and one capital, covering 75,000 km2 and 11,5 million inhabitants. The STRING partners now represent one of the major regional collaborations in Europe. The STRING area follows the one branch of the most northern part of the EU prioritized TEN-T ScanMed network. This strengthens the collective influence of the STRING corridor immensely on both a national and EU level.

“For us, it is important to view the whole of the northern part of the ScanMed Corridor as a connected area with mutual need for improved infrastructure to ensure growth and development.  Our membership of STRING will provide Akershus County Council, and actors in our region, an important network along a prioritized axis, strengthening the development within numerous of our focus areas”.

Mayor of Malmö, Katrin Stjernfeldt Jammeh, is also happy to become a member of STRING, having worked closely together with the network on several occasions:

“We are delighted to have been invited to join STRING as a full member. Malmö has for a long time been indirectly involved in STRING´s work. I.e. from joint European projects and publicly supporting STRING at home as well as in Brussels. Within our cross-border region we have developed knowledge through the Öresund bridge regarding what a fixed link between two countries can do for an entire region. Malmö can bring these experiences, as well as dedication and participation, to the STRING´s work ahead”.

With a growing focus on functional regions and cross-border cooperation, STRING is now a heavyweight example of a collaboration that stretches from Hamburg in the South, over Zealand, Copenhagen and Malmö up along the Swedish West Coast to Norway and the Oslo area. STRING represents an affluent area of Europe specialized in industries with innovative technology, transport and logistics, life science, material science and with renewable industries and tomorrow’s energy solutions as core parts of its economy.

“With five new members joining STRING, we have established the foundation of a strong corridor, showcasing an excellent example of cross-border political cooperation sitting at the northern top of Europe. We are obligated to work continuously and in collaboration for our visions of modern societies”.