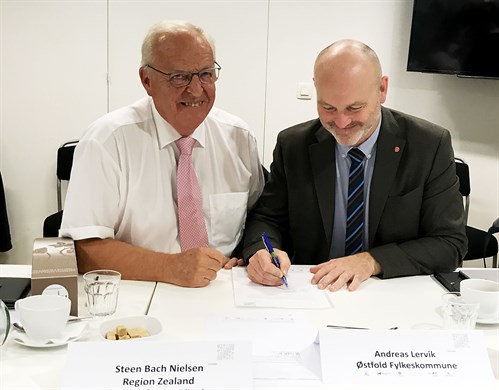 STRING to expand with five new members in 2018

The STRING Cooperation is in the process of expanding the STRING region northwards to Norway with the City of Malmö, Region Halland, Västra Götalandsregionen, Akershus Fylkeskommune and Østfold Fylkeskommune.

A positive expansion of the STRING ‘family’ is taking place right now with the regions along the Swedish west coast and the regions around Oslo. The City of Malmø has already clearly said “yes please” to the invitation to join this larger political cooperation and with letters of intent from several other regions, the path has been made clear to welcome the new members. With regard and respect for the necessary political decision-making of the new organisations, all six regions and cities will become members of STRING on 1 January 2018.

Mayor of Malmö, Katrin Stjernfeldt Jammeh, is very pleased with the decision to join STRING.

– We are delighted to have been invited to join STRING as a full member. Malmö has for a long time been indirectly involved in STRING´s work. I.e. from joint European projects and publicly supporting STRING at home as well as in Brussels. Within our cross-border region we have developed knowledge through the Öresund bridge regarding what a fixed link between two countries can do for an entire region. Malmö can bring these experiences, as well as dedication and participation, to the STRING´s work ahead.

An expansion of STRING with the regions on Sweden’s west coast to Norway follows the one branch of the most northern part of the TEN-T ScanMed network. Thereby, the collective influence of the STRING regions will be immensely strengthened on both national and EU levels. By developing a common, strong political agenda that covers a large geography in Northern Europe, STRING’s joint voice will resonate stronger. The new coming members are also strong in their support for the Fehmarnbelt Fixed Link in recognition of the importance of the link for the whole of Scandinavia.

Jacob Vestergaard, Managing Director of STRING, has worked with the recent Chair of STRING, Steen Bach Nielsen, on the expansion of STRING and comments:

– The expansion will without doubt give a better coordination of efforts, politics and investments and open up for exciting new and common projects.

From 1 January 2018 the following regions and cities will become members of STRING (with respect to political deciscion-making in the respective organisations):