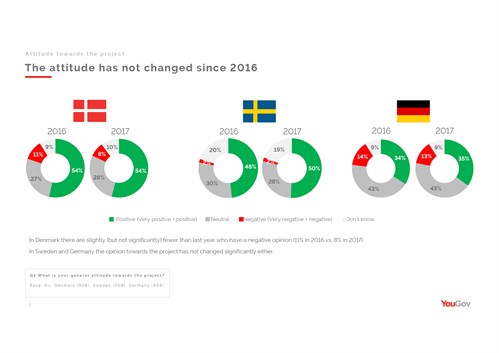 In Skåne, Zealand, Schleswig-Holstein and Hamburg, support for the Fehmarnbelt fixed link remains strong, shows a new survey carried out by YouGov on behalf of STRING in May 2017.

Compared to a similar survey from the autumn 2016, only marginal changes have occurred in respondents’ attitudes:

All changes are within the survey’s range of statistical uncertainty and cannot be interpreted as a trend.

Attitudes to the project very much depend on the knowledge that the respondents have about the project: the more informed people feel, the greater the percentage of positives. Among those who know about the project, 61% are positive in Zealand, 72% in Skåne and 43% in northern Germany.

The public consultation, which is part of the German approval process, is about to enter a decisive phase, which means that the link will feature in the media over the coming months.

It is, therefore, interesting to look at German attitudes in particular:

46% of the male respondents in Germany are positive about the link compared to 26% of women. The longer the education and the higher the incomes the respondents have, the more positive they are towards the link.

The link’s impact on tourism has also been a major discussion topic in Germany. 54% of those surveyed believe that the link will benefit tourism.

Overall, there is a clear impression in all three countries that the link will have a positive effect on socio-economic conditions such as trade, transport, competitiveness and job creation.

When asked about their own actions following the opening of the link, only very few believe that the link will get them to take up a job or move to the other side of the link. However, 30% expect to do more shopping, 40% believe that they will travel more/more often to the “other side”.

The survey was conducted by YouGov analysis institute. Over the period 18-30 May 2017, a total of 508 interviews were conducted on Zealand, 508 in Skåne and 808 in Hamburg and Schleswig-Holstein. The respondents were aged 18+. All interviews were collected on-line (CAWI). The results have been weighted against the total population based on an ideal from Denmark, Sweden and Germany and are thus representative of the population in the region.