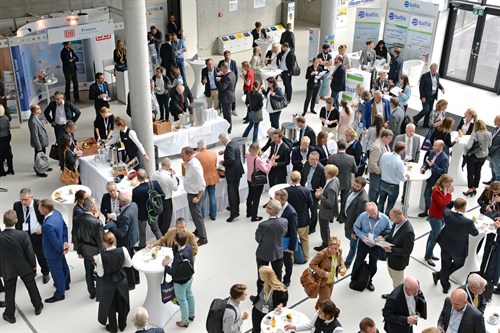 The Fehmarnbelt corridor for the people

The Fehmarnbelt Tunnel needs the ownership of the public in order to harvest the full potential as a strong economy based on green growth.

The Auditorium at HafenCity University waved with dark business attire. Slowly, continuously moving towards a free chair in row after row all the way to the end of the auditorium. Voices during hand-shaking, small talking and business card-exchanging rose into a buzz, filling the air.

These suits and skirts, whether containing press, politicians or contractors, had made their way to Hamburg to attend The Fehmarnbelt Days; a three-day convention to network, get a new perspective or present a case regarding the building of the Fehmarnbelt Tunnel.

– This corridor can create a new macro-region in Europe with nine and a half million people, high level of GDP and an enormous growth potential. It is a gift, which can keep giving, says EU Coordinator for the ScanMed Corridor Pat Cox.

Wednesday afternoon, chair rows filled in front of a podium stage where the political network STRING had six little tables equipped with a water bottle and a microphone. From Politics to Growth and Development – a cross border mind-set, this was the name of the event where a panel was engaged in a debate on how to unlock the growth potential of the region, stretching from Hamburg in Germany over Zealand in Denmark to Malmö in Sweden.

Make everyone a winner

– For the Fixed Link to become a success, the people needs to feel like is also their project. If it gains the support of the public, it will sure be a success, says EU Coordinator for the ScanMed Corridor Pat Cox.

This point of view was widely shared across the discussion panel, presenting a range of interests from creative jobs, commerce, city development, education to politics. Even though the Fehmarnbelt Tunnel is an impressive building project of an 18 kilometer immersed tunnel, consisting of massive concrete blocks, with both two lanes for cars and a high speed train going from Hamburg to Malmö in just two and a half hours, it is considered a tool to achieve a greater vision of green growth.

A strong cross-border infrastructure could be able to attract more businesses, create more jobs, enable better exchange programs for students and enhance culture and tourism. This is the experience from previous projects. However, the same experience has shown that a sustainable growth is only secured if the population and civil society is integrated in the process from the very start. They must be able to see the reason behind integrating and interacting with neighbours on the other side.

– The Fehmarnbelt project compares to the Brexit in that way that only most of London and the elite areas voted in. We need to make sure that everybody is a winner in this. Not just the educated elite. I cannot stress this point enough, Monica Schofield, Director International Cooperation, TuTech Innovation, said.

Live in Germany, study in Denmark

The idea of a Fixed Link is to connect Denmark and Germany in a way that is fitting for a world that is increasingly interconnected. Until now, only a ferry line has connected the two islands of Lolland and Fehmarn. The trip takes three-quarters of an hour. When the tunnel is completed, travel time is significantly reduced.

– You would be able to go to Copenhagen University for a lecture in the daytime and then be back at supper, the moderator of the panel debate proposed.

To which Björge Köhler, Chairman of AStA of HafenCity University replied:

The final speech of the event was delivered by the newly appointed chairman of STRING, Steen Bach Nielsen. Standing next to a pyramid of building blocks in black, blue, orange, white, red and yellow, spelling: Feh – Marn – Belt – Days – 2016, he made the vision of the Fixed Link as a game changer in European trade clear.

Catching him briefly on a steady island of colleagues in the waves of dark suits, all heading for afternoon coffee, he explained how:

– To make the Fehmarnbelt everybody’s property, we need to raise awareness of the benefits and possibilities, both national and European, that the Fixed Link brings to the region, he said.

In the STRING secretariat, a more concrete plan of action is taking shape. Managing director of STRING, Jacob Vestergaard, finds inspiration in the German model that has debate forums and public discussions.

– We want start a dialogue, where the civil community gets a saying in what they want, and how to do it. We want to get around; is this growth green? Does the exchange programs work in the best way? Is the transport optimal? he says.