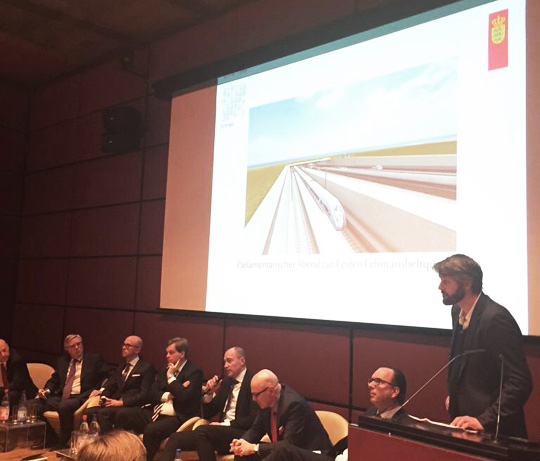 On the 25th of March, STRING and the Danish Royal Embassy in Berlin arranged a Parliamentarian Evening on the topic of the Fehmarn belt fixed link. High level politicians and business representatives from Germany, Sweden, Denmark and the EU brought forward some very clear messages on the actuality of the project and the future of the region. The message from all the participants was unanimous: the Fehmarn belt link is not just about infrastructure; but about visions, jobs, sustainable growth and European cooperation.

Even though the Parliamentarian Evening on the Fehmarn belt link was stained by the tragic German Wings air disaster in the French alps, none of the over 130 participants at the event were left with any doubts as to the extent of the massive backing for the Fehmarn belt project and its importance to the future of the region as well as the entire EU by the EU, Swedes, Danes and Germans alike.

The demands of a re-negotiation of the State Treaty of the fixed link, as called for by the opposition and the State revision Bundesrechnungshofs, were rejected. The Danish Minister of Transport, Magnus Heunicke, agreed with German Parliamentarian State Secretary from the Federal Ministry for Infrastructure, Enak Ferlemann, that there are no cause for re-negotiations. The arrival of the tunnel was established, as well as the fact that the Germans will deliver a state of the art, double tracked and electrified railway connection from the German side of the tunnel in Puttgarden to Lübeck and Hamburg.

Fermelann added that there should be no doubts in anyone’s mind that the German Federal Government want to secure the realisation of the Fehmarn belt fixed link, as well as the necessary modernisations of the German railways off the tunnel. The German road access is on its way and will be ready on time. An area of slight uncertainty is presented in the form of the listed bridge across the Fehmernsund, whose capacity will be inadequate to serve the Fehmarn belt fixed link. The authorities are however already in discussions to find a solution to this problem.

Ferlemann and Heunicke both stressed that the German delays are primarily down to a new rail alignment, on the background of comprehensive citizen involvement. A fully fledged new stretch, tailored to speeds of 200 kilometres per hour, will on the other hand be ready approximately three years after the opening of the tunnel, rather than seven years in, as otherwise stated in the State Treaty.

The Swedes are in!
Swedish State Secretary for Infrastructure, Erik Bromander, was also crystal clear in stating that the Fehmarn belt fixed link is also about realising an old vision to tie Scandinavia closer to continental Europe. The fixed link is instrumental to growth and trade with the rest of Europe for Swedish business. Additionally, the fixed link will also improve communication between the Swedes, Danes and Germans and therefore support cross-border cooperation in important areas such as science and research, and trade. The Swedish government is 100% behind the Fehmarn project – and very interested in contributing sustainable transport solutions all the way from Stockholm to Hamburg – with electrified high-speed rail only being an example.

Bromander also stressed the importance of STRING as an organisation, and its worth as a best-practice example of cross-border European cooperation.

9,000 kilometres of railway
EU coordinator of the TEN-T Scandinavian-Mediterranean transport corridor, Pat Cox, talked about the importance of the Fehmarn belt fixed link in realising the largest of the EU’s nine transport corridors, which covers over 9,000 kilometres of railroad from the Russian border in Finland to the Southern parts of Italy and Sicily. Cox expressed his pleasure over the fact that the Fehmarn belt fixed link is on its way to becoming a reality – especially in the light of the start of the construction of the EU’s other mega-project, the Brenner tunnel between Austria and Italy.

The amount of applications for EU support for projects within the Scandinavian-Mediterranean corridor only demonstrates its importance to the whole of the European transport system. Cox also stated that the EU considers the Fehmarn belt project a core project, and one that receives a lot of attention and interest from Brussels.

Finally, Director of DI Transport and the Vice-Chair of the Fehmarn Belt Business Council, Michael Svane, talked about the business perspectives of the Fehmarn belt fixed link as a connector of 9 million people and 600.000 businesses in three countries. He went on to state that the important thing is not to view the region as it is now – but how it can change in the future.

Looking at the opposition, Svane explained that there will always be winners and losers when it comes to projects of this scale. The point, however, is that the Fehmarn belt fixed link will result in more winners than losers – also in business, closed Michael Svane.