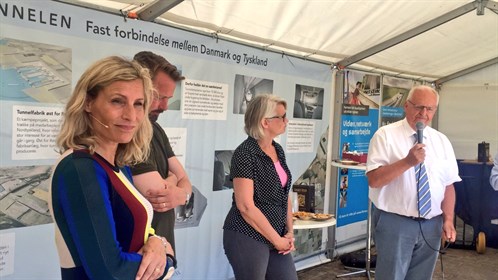 Folkemødet: A look into the future of the Fehmarnbelt Region and beyond

The Danish ‘democracy festival’ on the island of Bornholm had more events and guests than ever. STRING had asked Future Researcher Liselotte Lyngsø to moderate an event called ‘The train is leaving – Fehmarnbelt in 2028’.

The panellists in the debate were Steen Bach Nielsen, Chairman of STRING, Ilmar Reepalu from the Regional Council of Region Skåne, Pia Kinhult, Strategic Advisor, ESS – European Spallation Source and Martin Bender, CEO of VisitSydsjælland-Møn.  Name of the game was to take a trip to 2028 and look back on the development since 2017. What were the greatest outcomes of the Fehmarnbelt Fixed Link? Which obstacles had been the most difficult to overcome?

First, Liselotte Lyngsø of Future Navigator set the scene for 2028. Instead of Wi-Fi, we have Li-Fi – a surrounding optical wireless internet. We have driverless cars, meetings and hospital check-ups by virtual reality and hologram, nanobots repair our bodies, and gadgets monitor our health and help us communicate seamlessly across language barriers by simultaneously translating our conversations in earpieces.

Research in 2028
Pia Kinhult looked at 2028 through the eyes of a research institution: In 2028, there is a large amount of interesting, global cooperation. Hamburg and Lund-Copenhagen are one of the first to establish strong trans-national research in large scale – due to both the short travel time between the cities after the opening of the Fehmarn belt Tunnel of 2½ hours. Also because meetings and research can be conducted by virtual reality and hologram meetings. Great advances have been made due to these collaborations within technical and material science and medico/health research.

Tourists of the future
Martin Bender, CEO of VisitSydsjælland-Møn had a vision of how the tourism of the Fehmarn belt region would look like in 2028: We have moved from high-tech to high-touch. In an increasingly digital world, touch, smell and taste are valued senses. This is something the tourism in southern Zealand and the islands of Lolland Falster have benefitted from. Architects and engineers have worked hard to find solutions to building intelligent hotels and summerhouses that are highly adaptive to the natural coastlines, leaving the unique natural environment. This has drawn many German tourists but also many tourists from the Far East, especially China. In addition, due to climate change, the temperatures have risen a few degrees Celsius. Therefore, Lolland and Falster are now renowned wine producers with new and modern vineyards. Together with the movement of local, organic produce, the islands are a great hit with the young ‘foodie’ generation.

Tunnel opening in 2026
Chairman of STRING, Steen Bach Nielsen, had very high ambitions for the corridor from Southern Scandinavia to Northern Germany – and surprised the attending listeners with his vision from 2028: We opened the tunnel two years earlier! Beltretter, Nabu and other environmental organisations decided to listen to their Danish counterparts and saw that the project had indeed considered environmental conservation. Therefore, they decided against taking Femern A/S to the The Federal Administrative Court of Germany, the Bundesverwaltungsgericht. As a result, the tunnel already opened in 2026 to the benefit of citizens and businesses on both sides of the Belt!

See our Storify compilation for tweets, photos videos and more from Folkemødet HERE