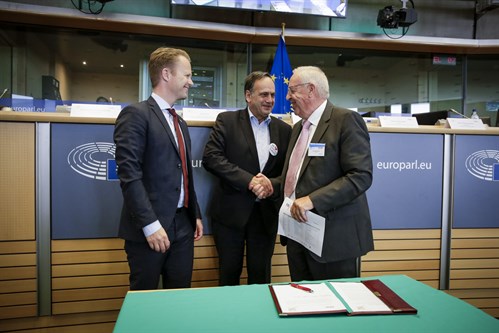 By removing a major European transport bottleneck, the Fehmarnbelt Fixed Link will greatly increase mobility and transport capacity of both goods and passengers in the corridor from Northern Germany to Southern Scandinavia.

Today at a conference held in Brussels, they signed a joint political declaration with national MEPs advocating why the Fehmarnbelt Link is essential for achieving EU targets of growth and sustainable transport as an important part of the Scandinavian-Mediterranean Transport Corridor.

–          We have sent a strong signal to the European Parliament, the European Commission and the member states today, stressing the importance of the Fehmarnbelt Fixed Link. This historically large infrastructure project under the sea will boost growth, create jobs, reduce CO2 emissions and remove a prioritized bottleneck in the TEN-T Corridor. We should all do all we can to help the process run as smoothly and quickly forward as possible.

–          Today we have once again been reminded what massive benefits this infrastructure project means, for citizens, for business, for job seekers, for the environment and for growth in general, on both sides of the tunnel. Brussels is about to start work on the next multiannual financial framework, and I will from my position fight to keep the European Commission and the member states aware that grants for cross-border infrastructure projects must remain a prioritized part of the future EU budget, he says.​

For Mrs. Gesine Meissner, MEP (ALDE), the increased mobility that people will benefit from is important.

–          The European transport networks are crucial for the realization of the idea of mobility across borders for goods and people, and the Fehmarnbelt Tunnel is no exception. The Fehmarnbelt Tunnel is as important as the Brenner Base Tunnel. Why is one applauded and the other heavily criticized by environmentalists? The tunnel will decrease CO2 emissions. People from Schleswig-Holstein and Hamburg, as well as Danish and Swedish regions, are looking ahead at a massive amount of opportunities, when looking for a job or a holiday destination, within a significantly shorter travel time.

–          National cross-border transport planning is of importance. It creates jobs, growth and improves the environment. There is no doubt that the upcoming budget negotiations are going to be tough. It is therefore of the utmost importance that we tell our national governments, the Commission and remind ourselves that EU grants must be preserved for projects like the Fehmarnbelt Tunnel.

The European Coordinator for the TEN-T Scandinavian-Mediterranean Corridor, Mr. Pat Cox, believes the Fehmarnbelt Tunnel will benefit Europe as a whole:

–          The Fehmnarnbelt Link will have an immense effect on the transport flows between Scandinavia and Central Europe. It has a high priority for the EU and will contribute not only to economic growth and job creation which off course is important – but also to the EU goals of reducing harmful emissions as the link improves the competitiveness of rail compared to road and air transport of both goods and people.

Everyone can sign up and join the Friends of Fehmarnbelt at www.friendsoffehmarnbelt.org